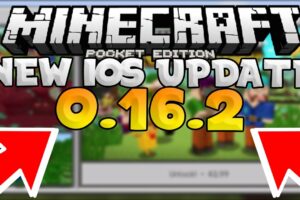 New version of the game called Boss Update is available now on Android for free and it brings 2 new bosses with very valuable items, for example, a Nether Star and you can craft a beacon from it.

It’s not by accident that the update is called Boss Update because the developers integrated 2 absolutely exciting and adventurous bosses to the fresh game.

You can stumble into the boss in the deep depth of the waters, he inhabits the Ocean Monument. This location is under the guard of the large number of the guardians.

The boss has one eye and a big tail, and large orb which can shoot lasers. The guardians will protect him and attack you but there is an opportunity to sneak around them in the new version of the game.

For example, there is no need to fight with the guardians, just swim through them and don’t touch anyone.

Nevertheless, don’t forget about hostiles generated in the monument, despite the fact, they do not often spawn. However, some of them, perhaps, will exactly be there.

Moreover, the conquering of the place does not finish with the death of the first Elder in this fresh MCPE. In addition, the creatures of the location drop prismarine crystals as well as shards.

There can be rooms of sponge in the marine temples in the new game version. Of course, you can loot everything there, except of Mining Fatigue which will not let you collect anything if you have not defeated the Elder.

On the contrary, Wither is more about hot and magma Nether.

In the revamped game you can collect skulls form Wither Skeletons.

The chance of the drop is too small, so to collect the item, you need to spend a lot of time. It is a good advice for players to go to the dimension with sword enchanted on the Looting.

Furthermore, a player will have to kill dozens of hostiles. When you have finally looted 3 needed skulls, construct a T-shape thing made of soul sand in newly made version of the sandbox.

Once the Wither is out, you will hear an explosion and the fight will begin. After the defeat, you can collect the Nether Star and you will be able to craft a beacon.