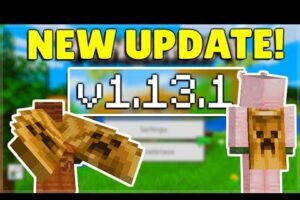 New update for MCPE Village & Pillage has been released and it brings important enhancements, a lot of fresh content and some renewed features.

The programmers of the Mojang are working hard on bug fix and errors correction that the players stumble in during the game. For instance, the most embarrassing problems were game crashes.

Fortunately, fresh version of MCPE is a stack of fixed bugs. Since the moment, you do not exit the Minecraft while you’re trying load a featured server or a Realm world. In addition, there was a possibility of a sudden game quit after lingering potion throwing.

In general, the developers have worked well under the improvement of a game experience.

A very important and impressive addition of the newly coming revamped version is a Character Creation. This is a new-invented creator absolutely changes the principles of the skins in Minecraft PE.

Now you can change the skin of your character in any way you wish. Previously you had to select one from the certain skins.

For example, you can try on a spider skin or put a fancy farmer hat on your head. You can customize all the parts of the character’s body in the new update. However, customization has got some problems.

Some players couldn’t load the game before the skin is loading.

Additionally, your skins and elytron are useable with custom skins you’ve made. Another fact, the middle part of a body had become invisible as some users told and it was a pity.

Moreover, the portal mistake is fixed in the new game version.

For some unknown reason, some players were teleported to the void of another place. users had to kill themselves and lose loot and the experience they had accumulated because of this bug, so that they could continue playing.

By the way, Korean and Japanese skins show right in the language options.

The most interesting feature that was made for the new renovation related to foxes. The red furry animals are very skittish. They will try to stay away from the player.

Unluckily, taming of it is impossible but you can become friends. These creatures are big lovers of sweet wild berries.

Furthermore, foxes have an ability to bring many loot in the mouths including weapon and undying totems as well.