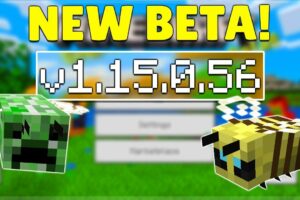 What Does the Update Bring to the Game?

The company of developers have announced that Bedrock and Java Edition of the MCPE would functions not differently for many long years. At last, change have been already presented to the public.

For instance, the interface of the command block now corresponds to a 4:3 ratios, which means that the player has got an opportunity to start designing on any screen. Additionaly, now it is possible to trim the sheep normally without any problems, as the update made it so that now the mechanics are correct.

Well, the player’s enchanted weapon since that has worked as it should. Before, they worked with an error. The developers very painstakingly worked through this malfunction and eventually coped with it.

Floating leaves, which usually remain when felling a tree, no longer interfere with the growth of a new tree. In addition to this, hoppers will capture bone meal from the composter above in Minecraft PE 1.15.0.56.

It is worth noting that the generation of giant trees will not happen if there are no blocks.

From time to time, you could find a floating fir tree in the tundra, which was ridiculously funny bug.

Main changes and what have been improved

A whole bunch of improvements are presented to your attention. According to the assurances of the Majong, they tried to do everything in their power to make the game experience more pleasant and chilling.

Now a fresh version works much more stable, which means that it will crash much less. Some users said that the hands in the game worked a little strange, but soon the bug was fixed.

Some bugs may even appear during the passage of the game. This can cause the entire world to be deleted. We are lucky that all the embarrassing bugs and problems have been fixed in newly released update.

It would be strange if the Nether Update did not bring improvements to this statement to the game, because all the big updates have done this before.

While programmers are working on making the gaming experience more enjoyable, other game designers are working hard on new features for creators. Look, for example, at the bee spawn eggs that can be changed in the content packs of the newly released update.