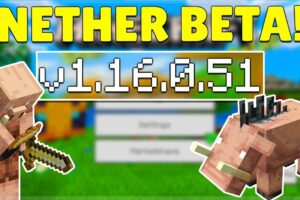 Meet a new free version of the Nether Update for MCPE for Android that adds new blocks, several changes to some parts of the sandbox, bug fix and so on.

What Is Remarkable About the New Renovation?

Finally, a very expected Nether Update is so close to the final step. It turns out, Mojang don’t plan any beta of the game. Forthcoming updates will focus fully on bug fixes.

For instance, at the moment, the game studio wants to fix some aspects of the biomes because they are processing wrongly. New version is summoned to enhance gameplay in the Nether much more.

What About the Biomes?

A particular part of the added Nether biomes has got their small refreshing. The studio’s programmers revamped the locations and now they process and are played how it must.

For example, you can notice a particular mist in the Underground World evenly walking around biomes.

Warped Woods are the safest location of the Nether. It turns out that a large part of the creatures doesn’t like something warped. This is the main reason for you to go there — to frighten hoglins and piglins and loot some added mushrooms up as well.

On the other hand, Crimson Woods is the most dangerous place of the Nether. It’s a big lair of hoglins, piglins etc. Any player can stumble into new kinds of logs in the forest as well!

So, the new revamped version is going to bring to the game many new wooden blocks. You can notice a special effect in Crimson Forest —spores soaring around.

Welcome to ghasts’ and skeletons’ lair in the newly updated game. The location is very scaring and threatening. Minecrafters will only stumble into ashes swirling from the top and few basalt pillars stretching from the top to the very bottom.

Interesting fact, when you lit the soul soil and the soul sand up, the fire will be blue. Now there are available blue torches for crafting as well as lamps and campfires.

Newly added blocks are the most impressive part of the revamped game. Now, there are available a lot of constructions for building from them.

To sum up, new biomes turn the Nether into more interesting place in the new update. David Walker Hi, I'm David! I checked it out and I'm giving you the opportunity to download this file for free. Visit my website more often!
1.16 android download minecraft pe minecraft pe update