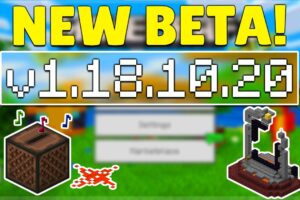 Get the MCPE version 1.18.10.20 (a working Xbox Live is integrated) and explore a newly made great survival cube sandbox!

As far as you remember, the MCPE version 1.18.10.20 contains such a notable effect called darkness. To speak more accurate, the effect reminds the blindness one.

Nevertheless, they are different because the effect of darkness doesn’t fully deprive you of sight. More simple, it just darkens your vision and reduces the field of view, however, you still see object staying closely in front of you.

The Minecraft PE 1.18.10.20 new renovation has brought something special for those players who pay a lot of attention to soundtrack. You can listen to fresh soundtracks in the main menu and the common world in survival game mode from now on.

Additionally, the fresh soundtrack disc Otherside has been added in the game and the item is rather rare. To seek for the disc, head over to the dungeons.

Firstly, we should tell you about integration of new rolling blocks in the MCPE update version 1.18.10.20. The developers have added 4 types of the blocks: shrieker, catalyst, sculk blocks and vein. Sculk blocks have been provided with an interesting animation and you can get XP-points from them when you break the blocks with a tool in the hand enchanted with a silk touch. Sculk Shrieker spreads a sculk block in the place where a creature has died previously.

The quantity of the blocks is related to the number of XP-points dropping out from a dead mob in the newly released MCPE update version 1.18.10.20.

In addition to the fact, the blocks illuminates. The next exciting block is a Sculk-Shrieker which is able to make a very loud sound. Moreover, a sculk sensor turn on the block. It is worth mentioning, that the block spells the darkness effect on you in this version 1.18.10.20 of MCPE.