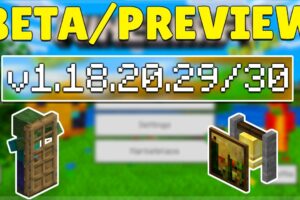 They’ve released a beta version of Minecraft v.1.8.20.29 for mobile devices. They fixed three bugs and made one technical improvement. The game has become less unstable. A new version with several bug fixes has been released. Users have recently reported frequent crashes. They should be much less now.

Visit beautiful biomes, use Froglight blocks, and much much more!

The Minecraft team never stops to amaze fans of the blocky worlds by adding new details to their game. They’re able to change things without changing the game world too much.

The renovation will delight Minecrafters with helpful new blocks, beautiful biomes, and an enhanced game experience!

There are several variants of mountain location types in the update. There are some mountains that are made up of snow and ice, such as high peaks. There are virtually no plants and animals in these places because the climate is so cold.

There are territories where goat farming is allowed, for example, Stony Peaks. Biome consists of gravel and stone. There are mountain meadows rich in plants because these are the lowest biomes of this group.

If we consider the cave systems of the new version of Pocket Edition, Lush caves are interesting. They sometimes form underground water reserves called aquifers. They also appear – deep and narrow canals.

The team of programmers created new caves that fit seamlessly into the existing cave system.

Among the blocks in the latest version of the game, you can get an awesome frog light. You can obtain the block by using a frog. But before you do anything else, you need to give her a magma block and wait for her to eat it.

Other than that, there

From now on, the damage from some mobs will be calculated more accurately, and their damage has changed. Players previously noticed the dragon breath damage bug. This problem has been solved as well.

Additions regarding the movement of Minecrafters. For instance, when playing in creative mode, players may descend and climb stairs and blocks without stopping.

Additionally, you can return to the world at any time. Even if you were in lava when you left the game, your position will be the same.

There are some technical changes.

Added one technical change for add-on development/testing in Minecraft.