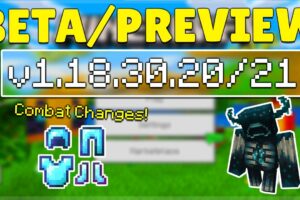 Mojang has introduced a new version of MCPE that is being tested on Android. The developers have renovated the Deep Dark, have worked on 14 corrects of errors for being the same as Java Edition and solved 22 problems. Players are still waiting for the Warden.

Get a new version of the game with a working Xbox Live: check out new blocks, walk through new locations.

Fresh Features of the New Version of the Game

There are nearly 8 changes related to the tech part. RenderDragon engine is on test on both Android & iOS gadgets.

You can find unrepeatable illuminating blocks in the new version of the game. The froglight presents itself as a cube and there are various colors: green, ochre, and pearl.

The game designers have reworked the appearance of the illuminating blocks and corrected an error that provokes the cubes to rotate randomly.

Frogs still live in the swamps. These illuminating blocks can be found thanks to the frogs. You need to feed these amphibians with magma. Then, froglight will drop out of them.

Mojang has updated the structure of a new version of MCPE and has added fresh kinds of caves and mountain locations. Stony Peaks are the highest point among the landscapes of the MCPE. Minecrafters will spend a lot of time before they get to the top.

Goats can be found in the location, also in the landscapes separated below. As far as we can judge, with the help of these creatures, you can receive a goat’s horn.

A horn falls out of a goat if it stumbles into a solid cube.

Dripstone caves are famous for their dimensions and there are a lot of copper ores, and in Lush caves, you can find unique wonderful flora.

The developers have tried on some more parts of a new version of MCPE. From now on the rate of exhaustion from hunger is more consistent with the Java Edition. Moreover, when they run or swim, minecrafters become hungry as they should do.

Additionally, you will configure the main hero’s depletion rate in behaviour packages.