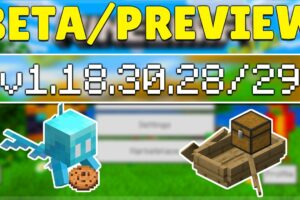 Get a new version of Minecraft Pocket Edition — update 1.18.30.28 with a working Xbox Live: get acquainted with updated items, blocks and also meet fresh special effects and so on! Test versions of Minecraft 1.18.30.28 for Android have been released, which contains Deep Dark depths and a boat with a chest. 5 changes have been made to Experimental mode, and 10 bugs were fixed.

The developers have integrated a lot of new things and have also added fresh sound effects to the new Caves & Cliffs Pt. 2 update, improved the game experience, and corrected a number of errors.

In MCPE v.1.18.30.28, the studio’s programmers have fixed a number of bugs that plagued previous versions of the game, such as the sounds minecrafters can hear during mobs’ deaths. The strip of hunger is now properly represented in all worlds. Mobs are no longer stuck on the ground.

The developers have made five updates here. More detailed description:

In the new version of the game, the Minecraft community got a unique feature: players can manufacture a copper horn from three copper ingots.

The sound effects for the goat horn, which mountain goats assist in obtaining, have also been incorporated into the MCPE version 1.18.30.28, and each goat has its own sound effect.

The horn must hit a stone block to fall from the creature, and iron and copper ore, emerald ore, or logs will all do the same. Additionally, In the mountains, there can be a goat with one horn, but cubs are born with two horns.

The froglight is a popular choice for minecrafters who have already tried this new version of the game and who wants to decorate their landscape or home with decorative blocks. To get it, simply give the frog a magma block and then it will drop.

Boat with a chest

The new transport is shaped like a usual boat, but has a chest on board. The Minecart with Chest works like the Minecart but requires experimental mode. It can store items while on the go, and is made by combining a chest with a boat.

In the new MCPE v.1.18.30.28, there are many other unusual blocks. Each of the sculks has different uses. The shriker’s special ability to create the effect of darkness on your character is its highlight.

The darkest Minecraft biome, requiring Experimental Mode. The only mob biome is Warden, which is covered by Sculk. Mob is not yet available.

The programmers of Mojang have made 10 corrections. The most crucial are:

Mojang studio has made two tech changes for making add-ons and for testers.