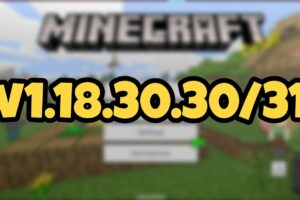 Explore the incredible underground world and use every possibility to survive with the new version of our favourite cube game MCPE with a working Xbox Live.

In the latest update, what is new?

Minecraft 1.18.30.30 has been redesigned for Android and fixes a serious bug in the creation of the underground part of the world. The game now works stably.

Special attention has been paid to the interface and characters of MCPE in this update. Some bugs have been fixed, making adventures in the block world even more enjoyable.

This week the long-awaited Deep Dark biome officially went into beta, which is good news since it includes a lot of new features. But do not rush: the joy will be replaced by a chilling terror. The fact that the Guardian calls this place his home makes it obvious that this place is not for the faint-hearted.

In the Deep Dark biome, dim light, darkness, and total silence surround players. Gamers have to be brave to endure all the trials of this inhospitable place. In this version of MCPE, The Warden will not be present, but it will be populated very soon!

Also, Mojang developers did not ignore Allay, as it is a friendly, responsive mob that has many fans in the gaming world. Allay was updated to this fresh version of the game, and several fixes were added, so now it can withstand injury from its owner. It can only accept similar items if Allay is in possession of one. After this mod gives an item, it gets a break.

For the Copper Horn, Mojang has not made changes in this version, but they may appear in future versions.

The underground areas on some maps were not properly processed in the last test version, which contained a serious flaw. They fixed one serious bug.

Mojang studio has fixed chunk generation below level Y = 0 so that all damaged zones will produce the same output.