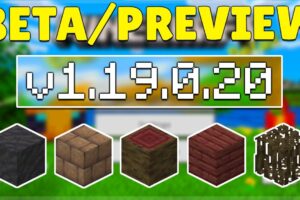 Get the latest version of MCPE, version 1.19.0.20, with an active Xbox Live account: Find blocks and mud block bricks in the Mangrove Swamp!

Mojang has released a test version of the survival cube game on Android. Mangroves were added to the game, and 25 changes were made. They’ve also fixed 21 bugs.

What is new in the latest version of Minecraft?

For all Minecraft Pocket Edition enthusiasts, Mojang has published a fantastic update.

Players can now encounter a horrible creature in the Deep Dark biome. He’s called “The Warden”.

He’s so scary that even his name makes people afraid.

If you find out about his skills, then no one will be indifferent.

In the new edition of Minecraft, players may now visit the Mangrove Swamp.

It is a new biomes in which you can find unique blocks and trees.

Mud, mud blocks (or bricks), and packed mud can all be found here.

Recipes for crafting items have been added.

A new biome with mangroves and offshoots. Its blocks:

There are many skills in The Warden’s arsenal, thanks to which almost every victim will be killed by him.

The frightening monster moves in the new version of the video game thanks to vibrations.

By the way, the beast has a keen sense of smell, which The Warden uses to track down his prey.

Beware if you see him sniffling.

Ancient towns and deep dark biomes are home to these creatures.

They may not appear to be significant at first look, but everyone should be aware of them.

Because they’re always somewhere below ground.

When they hear screams, The Warden will definitely come out.

Even if the player is aware that a scary monster is close, it is preferable not to engage in combat with him.

You don’t need to do anything special to get the Warden to go back underground. Just wait for 60 seconds and he’ll be gone.

Abandoned buildings are scattered throughout the Ancient City biome. They contain many unique items.

But the hero must be very careful because the treasure is guarded.

Apart from these fantastic new features, Mojang has also repaired a number of issues, making Minecraft even better than before.

An acoustic sensor reacts to:

Twenty-one bugs have been fixed by testers;

For addon testing and development, the programmers performed a total of 25 technical modifications.