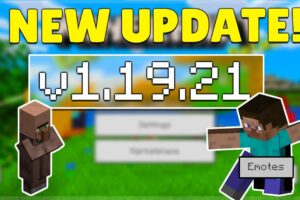 Congratulations! New update of MCPE has been finally released! Let’s look through everything the developers have done in this version.

Well, as we see, this 21th version is dedicated to bug fixes that the community has found in the previous update. Some parts of the game did not work well as they should. But, hotfixes were not long in coming. The developers from the studio made an effort to release correction as quick as possible.

Also, they give thanks to fans that reported about these issues which we discuss here — you helped find them immediately. They know about some problems related to cross-platform gaming on Nintendo systems. Wait for the coming fix soon.

So, now we can finally take a look at current fixes:

The next color problem was that tropical fish spawned only one color.

Even if you set a color in the entity event, it would only be one color.

As well as llamas and horse had wrong appearances.

To sum up, we looked through the whole list of bug fixes that Mojang has done in this version. Our favorite game became better again and the devs do everything to improve our gaming experience. Now, we can only wait for new additions with new fascinating content, updates, fresh chips and functionality.