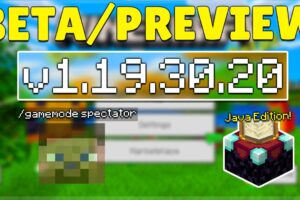 Previously endermen began to scream at the moment a minecrafter stared at the eyes of the creatures while playing in the Creative. Henceforth, they don’t become aggressive to gamers that have activated the mode.

The developers have changed the collision field of the fireball object to match the Java version.

Also, from now on players can hear a new sound of the Enchanting Table during enchantment. But another sound has been deleted – when you jump off the Amethyst block, there is no specific sound.

Some players reported that they met sculk shrieker and sensors not as often as they wanted. Another change to the vanilla parity is that the sculks do not spawn rarely.

Another users’ reports: the top texture of the object and the bottom one are not the same. There is a side texture at the bottom. This moment was adjusted and now it matches the top one.

There was a problem in the form of the cats’ heads position that was wrong when the pets were sitting. The developers placed them one pixel below.

The animation when you pick up items is displayed every time the service life of your tool is reduced. That is how it worked, at present the item pickup animation is shown only when a new thing is stacked.

Players have noticed that villagers’ names vanished in the trading tiers. This problem was solved and you can see their names now.

Endermen got angry when you stared at them in spectator mode. The bug is fixed and they don’t act aggressive any more.

Perhaps you know that a sculk sensor captured you swimming in liquid substance while playing in spectator mode. Now it doesn’t react.

Players switching to spectator mode will unhook all the fishing hooks attached to them.

Detonation of TNT, creepers, end crystals and so on can push minecrafters in spectator mode, despite the fact explosions aren’t literally close to you. This problem is solved.

Next, there were particles emitted by powder snow when a player in spectator mode came through it and after some fixing the bug was fixed.

The devs changed the case of spectator interaction with big dripleaf making the trees tilt without any physical contact. The woods don’t tilt that way any more.

Users in spectator mode lost their inventory. But not in this version because the bug was fixed.

There is now a possibility to not draw animals’ attention when you have their best meal in hand.

Remember when the upper mud brick slab filled incorrectly? Now it can now be installed as an upper slab using the commands.

Also Border blocks can interfere with passage at all heights from now on.

The animation of the piston when extending and retracting is currently smooth.

You can now repair your broken Shied with Crimson, Warped and Mangrove Planks.