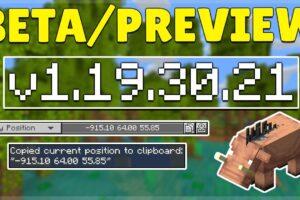 Mojang team is still developing a new version of MCPE. Now, there is a test preview available. Let’s check out what the job’s done.

If a parrot sits on Steve and you activate Spectator Mode, the bird jumps off in this version. Also, the mode is updated with the feature that your feet will not be cold and the Frost Walker enchant won’t spell its effect on liquid surfaces.

Some general changes: the developers solved the problem when Light Blocks may vanish if an Armor stand is put over the blocks. Previously, if you put it inside the block, it removed it.

Moreover, mobs got some updates: they corrected Zoglin and Hoglin HP and hitbox.

Some things were also upgraded. From now on, Iron Bars are available again with command in Creative as well as they don’t vanish in your inventory in this mode any more. This statement is also related to White Glazed Terracotta. In the current version the bars were not shown in the inventory in the mode.

Let’s look over some fixes in the technical part of the game.

First of all, MCPE doesn’t show an error when you open Marketplace.

What’s new about the game interface? Okay, there is some work done as well. The devs integrated a ‘Retry’ icon in the Xbox cloud synchronization prompt.

So, you should know that henceforth Kelp and Seagrass are not considered as Coral Decorations in the Creative inventory in this version. Some game fans reported on forums that these floras had the wrong classification.

Remember the issue when blocks and most items are cut off through a first-person view when they are in the hand? Now it is corrected.

Following correction in the game shop is that Character Creator offers’ thumbnail pictures won’t vanish when you close the Dressing Room.

The development team integrated hotkeys in the game! In this version you got an opportunity to copy your location data or of any block with the key shortcuts:

To activate the hotkeys, you should turn on a special setting in the Creator options.

Another addition is a waterlog field to the ‘/structure’ as well as the Structure Blocks’ load tab. It helps you to waterlog something that has been put under water in the right way.

In this version the developers, as always, added a lot of content for mods makers and map creators.

So, as we see in this preview, Mojang tries to make its game better and better again integrating new functionality, adding fresh features and perfecting what they have done before. That’s why testers are seeking bugs and programmers work on them. Good luck to them and may they give us more and more pleasant add-ons and updates for our favorite cube survival title! Stay on and stand by not to lose new information about releases, we follow the situation. Bye.