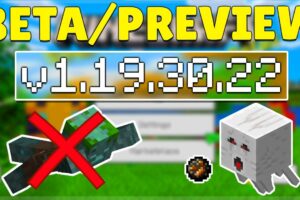 Hello readers, Good day to you! We’re glad to introduce you to a new test, preview version (beta) of MCPE that has been released on PC, consoles and smartphones. Mojang has tried to add some new content, but, first of all, they’ve done a lot of work related to fixing, versions’ equality, etc.

Some game’s fans on forums reported that Powder Snow rendered with thick fog when gamers activated Spectator Mode. In this version the problem was solved.

Previously, you could leash animals while being in the mode. Unfortunately, now leashed creatures won’t go with you in this mode.

In the last version you could see some particles when running in Spectator Mode. But, henceforth, particles do not appear.

Also, players could notice effect particles around the player in the mode. At present, you don’t emit them anymore.

Let’s move on the creatures. For example, Drowned are not generated in Warm Ocean ecoregions anymore.

The same problem was actually for the empty Glass Bottle. But the issue is corrected as well.

Gates made of oak and mangroves did not ignite as some minecrafters reported on the Internet. So, from now on you can flame them. 🙂

There was a problem when you applied /kill command to Chest Boats and they didn’t drop their content or themselves. And currently it isn’t, you feel me?

Game experience functions also have been fixed. For instance, you can forbid ghast fireballs to teleport through portals as they’ve done previously and then have got stuck forever.

Your loot that you drop at the edge of a flowing liquid substance does not get stuck from now on.

Another thing about… things. The development team solved the problem when some user loot from Creator Features packs were doubled after your application and death.

Also a bug was fixed when a not broken instrument such as a Pickaxe, when switching the title on the Anvil, could not work as it should when first have applied.

Blocks that need a support one are now displayed on the map in the air and on incomplete blocks.

Game’s visuals have been reworked as well. The developers corrected certain water appearances when wrong textures of waterlogged blocks were shown.

Now, in this version the sky in the End does not look noisy when it’s raining and you’re arriving from the other dimension.

Some corrections were made to the mobs. Allay does not get stuck in incomplete blocks during flight.

From now on you do not need to download music from Marketplace and it’s integrated in MCPE.

Okay, let’s take a look at something ‘not dull’. As some reports said, MCPE briefly and repeatedly froze in the void (caused by the fact that Baby Striders ride Striders). This problem was solved.

Incorrect axis of the coral floor fan when installed facing north/northwest/northeast is corrected.