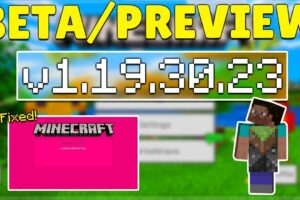 Another day — another update for our favorite cubic game! So, Mojang has released a new test, preview version and has introduced Beta that is available on all platforms (PC, smartphones and consoles).

Do not pull the cat by the tail and look through all the changes, new functionality and corrections.

First of all, draw your attention to the versions’ match. Some of the spectator features are still experimental but there was a lot done. For instance, the issue when cape would still be showing in the mode is solved. Henceforth, capes haven’t emerged in Spectator Mode.

The next problem, that minecrafters met during gaming sessions in the mode, is that they set on fire when they got in the lava cauldron. From now on, there is no ‘caught on fire’ animation.

Well, what about game experience? Appearance of the game changes to pink when playing for a long time as some minecrafters reported. The developers noticed this issue described on forums. They said, they are grateful for the patience of the minecrafters and that they are still working on solving this problem. The developers assured that they will soon sort it out and correct everything. And the devs didn’t lie! At present, MCPE textures and interface elements do not become pink when you play for a long period on servers with many players.

Additionally, the development team corrected an error when a gamer could see inside the Top Show when diving into it with elytra.

Were visuals changed? Yes, they were! As you know, there was a bug in the form of the name tag background a little bit offset.

Ok, another theme, the size of the random teleportation cube of the Endermen has changed from a normal cube to 64x32x64, so now at Sim distance four endermen can teleport out and disappear themselves —the fact told by some forum fans. Now, the corrections were adjusted on Microsoft systems. Reduced the teleportation range of the Enderman to lower values to ensure that he cannot destroy himself when teleporting.

In this version, it is now impossible to get an outdated selection in the inventory by block sampling.

Stacks of elements are now joined together after assigning a tick threshold value.

What was also made by the devs?

But that were little issues, and some problems related to creatures were quite serious:

For example, all sounds stutter and echo in the 7/12 update. Gamers reported that a sound happens and then pieces of the sound echo rapidly. Footsteps sound like there’s 10 footsteps happening per step, sometimes more. The change was returned to Drowned Spawning, and they reappear in warm ocean biomes to match the Java version. Fixed issues with Sony systems audio stuttering at low frame rate.