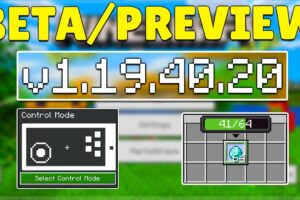 Nice to meet you, guys, I’m glad to introduce you with fresh information on the new MCPE beta-test preview version. That’s why Some parts of the game can work wrong but it will be corrected. The release is available on all platforms (PC, mobile devices and consoles).

Let’s get it started with creatures’ spawning in Ancient City. Henceforth, this place and journey there became not so dangerous and hard as it previously had been. The developers corrected uncontrolled spawning of mobs.

Next thing that was fixed is touch controls on iOS and Android smartphones and tabs. From now on you can change Touch Controls in the Settings to meet your needs and make game experience more comfortable.

Then, in this version you will jump from the water automatically during your trip to the shore if an auto-jumping is on.

Also, destroying blocks by accident now will not happen so often thanks to the new feature — if Action Buttons are disabled in Creative Mode, the delay for destroying the 1st block was increased to 8000 millisecs.

Another new function is a possibility to drag and drop loot with touch controls in your inventory. Now, it’s more comfortable to split stacks with touch controls by long pressing on them thanks to the new user-friendly interface. You can 2x tap on the ‘descend’ button and disable flight in Joystick touch controls settings. The scheme of status effects for Pocket UI is refreshed.

Did you stumble into the problem when in Spectator Mode your character dropped your XP-points when you died? Now, this issue is solved. It means that in this mode you will not lose your level on death. If you or others murdered by renamed weapon currently there is shown a death message with the weapon new name. As some gamers reported, tall birch trees, shattered savanna, badlands plateau, and dark woods ecoregions had incorrect grass color. Now, the problem is solved.

As you, perhaps, know, Text Background Opacity hasn’t worked for most text. The issue is corrected as well. The text background of the hotkey panel element now depends on the Opacity slider of the text background.

We started with the fact that dangerous creatures spawned in the Deep Dark and Ancient City. At present, gamers will not meet mobs there. NPC names are only displayed by default when viewing them. As some fans from the community reported on forums, falling blocks broke when falling on all kinds of double slabs. The bug is fixed. It was not possible to run diagonally if «a» or «d» keys are held first. Now it is possible and it’s great.

Huge Warped and Crimson Fungi logs broke blocks they shouldn’t — there were such reports on forums. So, they do not remove them from now on. There were problems with how the signal strength is calculated and displayed. The bug with Redstone is fixed. Pistons near the built limit or void didn’t work as they should in the previous version. Sticky Pistons issues are solved currently.

At present, nicknames cannot be more the limit size (before the update, usernames became above max size). The texture of water on waterlogged buttons, leaves and slabs were too bright when placed under buttons, leaves, slabs or any whole block. Currently, the textures are not too bright. In the previous versions some soft makers met an issue that when they were test MCPE on their fresh Arm-Mali GPU device that when they launched MCPE, the game only draws a block of color on the display. Fixed a potential problem with screen position on Android devices by the devs. That is not full information about the version but the most useful. For more details, check Mojang official resource. Thank you for your attention.