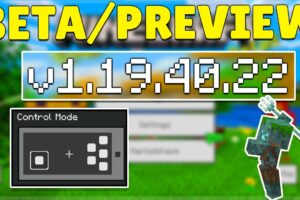 Hello, guys! Nice to see you again and it’s nice to introduce a new release of a MCPE beta test version from Mojang to you. We should point out that it is available on all actual platforms (both desktop and mobile devices as well as consoles). Also, take into the account that this release does not reflect a final version and can operate incorrectly.

Here we are born to be kings! Do you remember which song these lyrics are from? Write in the comments, it will be interesting to read. But seriously, here’s some new updates and corrections. Let’s take a look at them.

The developers are closely watching reports on the community’s forums. Fans tell about errors, bugs and crashes and the development team appreciate this feedback that helps them to detect and adjust quicker. MCPE First of all, some experimental functions related to Spectator mode.

When players entered one, gamers caused the bubble column sound to play as some reports said. When entering or leaving bubble columns, spectator minecrafters do not make sounds anymore.

Scaffolding ignites for 1 min in a furnace, which is 4 times as long as a block of solid wood. Scaffolding should ignite for 15 secs, the same amount of time as a wood block since it is built of Six bamboo, which flames for only 2.5 secs.

Reports: “scaffolding as too much fuel is burned”. The problem is solved and, currently, scaffolds flame at a more accurate speed of 1⁄4 of an object.

Finally, when a block beneath a flower coated in snow is broken, the flower falls out instead of the snow layer.

When a fan discovered that the water in his construct was not submersible and didn’t form bubble columns, he attempted to replicate it in another region of his game

‘It’s difficult to describe, but depending on where you discharge it, projectiles like arrows and tridents can become stuck in the atmosphere. When firing an arrow or trident while looking down, it appears as though it gets trapped in the shooter’s torso or something.’, — forum reports

Shooting could cause projectiles to become stuck in the atmosphere. Reverse the modification that rendered Arrows and Tridents immobile.

Without a Protection Enchantment, armour lowers damage from a Wither effect

The devs solved that problem in the new release where armour might cause Wither effect damage to be lowered.

When viewed from a distance, a fixed beacon block abruptly disappears in this release.

When attacking an aim, Drowned with Tridents might have them transformed into fishing rods and still shoot Tridents. After assaulting a victim, they could also unexpectedly have a nautilus shell in their free hand

A problem where Drowned might alter held objects when attacking was corrected at last version.

Control of the game

Graphics for the three analog joysticks in the touch options menu have been enhanced by the devs in the new version.

There was a bug that prevented users from selecting or dragging things from the equipment screen. The developers corrected an issue that prevented motion controls from being used to swap unstacked objects.

Some sources said that in contrast to earlier releases, the text description underneath the Dark Effect Strength and the Notification Duration currently utilizes a deeper shade of colour. It also occurred when using the default mobile network description options. To sum up, in the availability and general options, text descriptions are shown in a darker hue rather than a lighter one. The text descriptions for the availability choices for “Darkness Effect Strength” and “Notification Duration” have been updated to a brighter tone to make them easier to read in the current version.