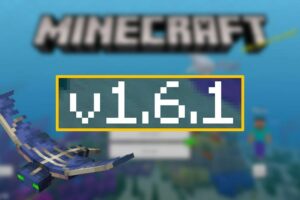 Main features of the new version

The Mojang programmers continue laboring on the updating of MCPE. New version brings a lot of fresh features into the game. Firstly, let’s talk about the phantoms.

The renovation is almost fully about the only one creature — a Phantom or, how it’s also called, the Monster of Night Skies. This is the next hostile mob which attacking you at the twilights.

As far as it’s known, Phantoms appear only at once you are not sleeping for more than 3 nights. There is a secret option “Insomnia” in the newly made update.

You should look at the skies in this condition. It turns out that the new mobs spawn in packs counting 1-3 phantoms at once. Their way of attacking is rather specific and to defeat them it seems like very complicated task.

The mobs suddenly swoop on the player from the skies. When they have jumped on your head, then phantoms fly away in the skies in the revamped game.

The fight with the mobs is quite difficult even with a help of bow and arrows.

However, if you kill a Phantom, you can loot membranes from them. The membranes are used in the potion of Slow Falling crafting. You, certainly, understand that it’s available to craft the splashing and lingering ones as well.

In addition to the fact, arrows with the Slow Falling effect can be used for affecting from the distance.

On the contrary, players can repair their elytron with the help of membranes in the fresh game version. So, you’ve got another method of fixing with no use of usual material like the leather.

Get acquaintances with the newly invented block – a Barrier in the new release of MCPE. Despite to the fact, it’s not available to use this block in Survival mode, everyone can get it in the Creative one.

The use of this block will be useful to map builders, we’re basing on its durability characteristics. You cannot see the block and break it no matter how hard you try. David Walker Hi, I'm David! I checked it out and I'm giving you the opportunity to download this file for free. Visit my website more often!
1.6 android download minecraft pe minecraft pe update