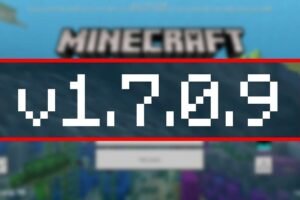 Meet the Aquatic Update for Minecraft PE on Android which brings many new content to the game, such as game rules and leaderboards, also — large – scale bug fix, game changing and enhancements in Creative mode.

New Features of the Fresh Version

Mojang programmers are getting close to the final stage of Aquatic Update and eventually move to Village & Pillage. Nonetheless, the game is lack of different correction that should be done to understand that the gaming process is doing as well as it should. This version of the game is filled with bug fixes, solving of the most annoying bugs and unpleasant cases. For example, the studio has deleted he “Down with O.P.P!” splash out of the Minecraft PE.

On the contrary, fibrous and boiled fish have got new names as a raw and a boiled cod, accordingly. In addition, Nintendo Switch players can play with 128x resolution texture packs since the moment of new version release.

Finally, players have received an opportunity to find and see the players list and easily understand who is your friend and who is a random player on public service by typing “@” sign.

As for this sign, you can use to contact another player directly by writing it in the chat with a nickname of any user. Mention of following player will be highlighted with a yellow and he or she will definitely notice it.

Marketplace has also been reworked at all. Now the place for trading is much more convenient and understandable, sorting and filter has become more comfortable.

Also, another added element of interaction is share button which forming link to send the content to your playmates.

Main menu has received update as well and it has got “Invite to game” button. Click on it and send invitation for friends joining.

Besides, the name of the world in which you have been loaded is seen on the top of main menu in this version of the game.

Your possibilities are unlimited in the fresh renovation of Minecraft PE. Anyway, there was a bug when some player lost the possibility to eat and drink in Creative mode. The renovation has solved this problem.

Administrators and moderators and players of the Creative mode are able to eat every kind of food, even chorus plant. David Walker Hi, I'm David! I checked it out and I'm giving you the opportunity to download this file for free. Visit my website more often!
1.7 android download minecraft pe minecraft pe update