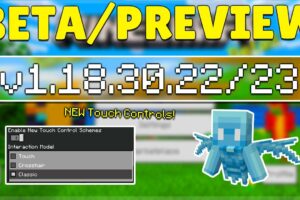 Developers have released a test version of Minecraft 1.18.30.22 for Android. The update added Allay, the Darkness Effect and a new interface. Changed Sculk Blocks and fixed 21 bugs.

Every time they release an update, the developers at Mojang make the game better. Minecraft PE 1.18.30.22 has many changes, fixed some bugs, and improved creatures, among other things. Frogs help users get froglight, shal­kers changed their behavior. Commands also got some changes.

Winner of a vote on Minecraft Live 2021.

Unique effects for Warden and Sculk.