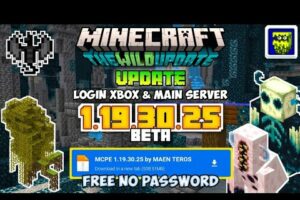 Hello, guys. Wow! New release from Mojang has been introduced to the community. It’s time to check out what has been added in this version. Point that it is a beta, test update for preview. It means sometimes you can stumble into some negative issues that do not reflect the finished game version. Additionally, the release is made for all the platforms, mobile ones, consoles and PC. You can download it from appropriate app marketplaces.

Okay, I won’t bore you any longer, let’s go through the updates.

The developers have changed some issues related to visuals of the game. MCPE has got rid of the bug related to liquid structures. Previously, water and lava appearances were not shown and didn’t have moving animation on the Apple devices. Henceforth, it’s corrected. The liquids have their appropriate animations.

Other work has been done on game processing. Do you first recall certain mistakes that happened with the Jurassic Park addition? If not, we’ll remind you. This MCPE Addon frequently crashed on the Nintendo system. After a brief period of play, the game froze. A window stating that “the software was closed because an error occurred” appears when the switch crashes.

Users also observed that their profiles’ marketplace was not functioning properly. They had to log in again since the game was signing them continually, but it didn’t stay in the system, so they were constantly running in loops. On the content they purchased there, there was a padlock icon. However, we don’t believe that’s the reason why Jurassic Park isn’t succeeding like it did when we signed the contract.

This issue with loading in environments with applied texture packs on Nintendo systems has been resolved.

Currently, that is all the developers have done. Well, it’s not much, of course, but the game has become better again and this is good news that can not but rejoice. Follow us and stay up-to-date on the latest trends in the industry, accurately MCPE. Thank you for your attention and see you next time.