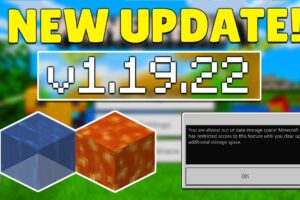 Hello, guys! Good news — Mojang has introduced to us a new release where some problems that the fan community has reported about were solved since the last update.

There are not so many bug fixes but everything that spoiled your game experience from now on will not disturb you.

Let’s analyze together what the job has been done.

First of all, do you remember some errors that occurred with the Jurassic Park addition? We can remind you if you don’t. This DLC for MCPE kept crashing on the Nintendo platform. There was a freeze after a few seconds of the gameplay. Switch crash window then comes up and says “the software was closed because an error occurred”.

Gamers also noticed that they were having problems accessing the marketplace in their accounts. The game kept signing them all the time, so minecrafters had to log in again, but it didn’t stay in the system, and they were constantly going around in circles. There was a padlock symbol on the content they bought there. But we don’t think that’s the reason why Jurassic Park is failing, as it did when we were signed.

This problem that could occur on Nintendo platforms when loading in worlds with texture packs applied is solved.

The developers corrected an issue where deleting cloud-synced worlds on Microsoft consoles did not delete the cloud version of the world when the player deleted the world locally as well.

And also, the devs solved a problem on the systems where minecrafters could see the “storage is full” message despite having sufficient storage.

At present, that’s all, folks. We follow the situation and updates and will report to you about every single improvement. Stay on.