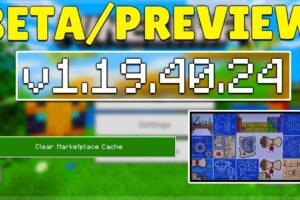 Hello, guys! I’m glad to see you again and present a new test version of MCPE (beta). It’s great to overview fresh functions and corrections of errors, crashes, solutions to problems and bug fixes. As you remember, the release is available for downloading on all actual platforms (smartphones, PC and consoles). ATTENTION! The version is a beta test meaning that some parts of the game can operate incorrectly and does not reflect a final result. Everything that work not in a proper way will be corrected in the full release. Let’s not pull the cat by the tail and look through the update.

Draw your attention to the game report from the fan community forum that told: “Areas in black on maps”. Due to client side creation, the creators prevent the landscape on maps from being replaced with black pixels in the new version.

“It is Unable to obtain some stuff in Marketplace,” as several gamers have reported. A minecraft player downloaded a number of mashup kits from the market, and everything worked perfectly up until this point. It displayed a blue exclamation point and prevents downloads for everyone in the previous release. Additionally, skins worked well.

The creators: On all systems, a Clear Cache option has been added to Storage Settings. This button clears the contents of Marketplace folders (but not worlds), which may also deal with material download troubles.

The participant in the survival game was unharmed by sweetberry plants. As opposed to earlier versions of Minecraft and Java Edition, when a minecrafter touched a sweetberry bush, they just slow down rather than getting hurt. Mobs continue to receive injury; only gamers are impacted.

Gamers are once more damaged by Sweet Berry Bushes in the latest version thanks to the programmers from Mojang.

The creators corrected an issue that stopped mobile users from scrolling through the Village trade list.

One the most important changes — Permanently undid a modification that connected the Accessibility Options’ Object Text Background opacity slider to the existing Text Background slider.

Other facts: In the Copy Coordinates segment, there was some nonsensical UI. The UI resembling the Y icon was located between the Copy and Paste icons, but hitting it had no effect.

Depending on the device, the copy coordinates gamepad tooltip currently utilizes the appropriate symbol.

While they work out some problems, they’ve temporarily reversed the adjustments to Dirt Path and Farmland collisions, in addition to Soul Sand and Mud block sinking.